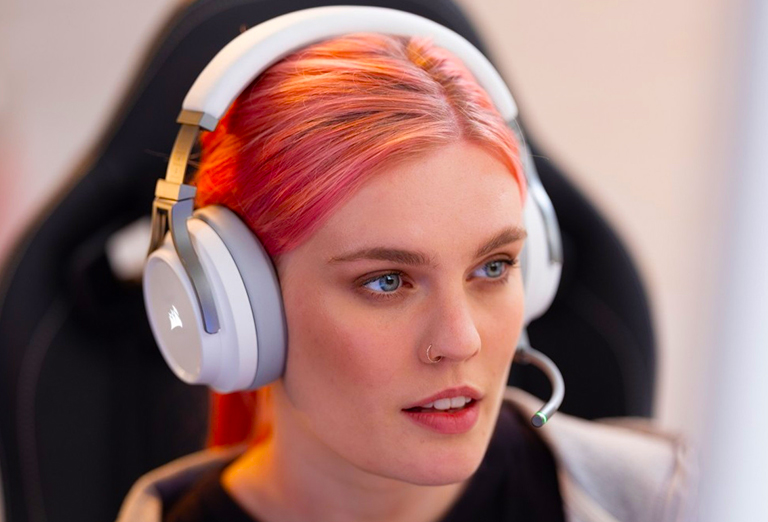 The Corsair Virtuoso Wireless SE is a high-end gaming headset offering a premium build, advanced microphone, and a suite of software features.

The construction of the headset is made of aluminum with a leatherette-covered headband and ear pads made of thick, soft memory foam. It offers a weight of 372 grams and has a comfortable fit and well distributed heft. The frame is built almost entirely from aluminium, with a leatherette-covered headband, and hinges that rotate to lay flat in either direction. There’s no creaking or otherwise reverberating noise when you make adjustments while wearing it. The ear pads are made of thick, soft memory foam wrapped in leatherette—they’re very comfortable, and establishing a decent seal is easy, though heat buildup is definitely an issue. Gamers with glasses may prefer something with velour earpads instead, as leatherette can cause issues around the arms of a pair of glasses.

The headset offers multiple connectivity options including a 3.5mm cord, USB cord or wireless connectivity using a 2.4GHz USB RF dongle. It’s pretty standard stuff, but appreciated all the same. Despite all the options, the headset is ultimately a straightforward plug-and-play affair.

The onboard controls are all laid out pretty well, too. Many headsets fall into the trap of having a bunch of dials and buttons that look and feel basically the same, but the Corsair Virtuoso Wireless SE doesn’t have that problem. There’s one switch, one dial, and one button, so no matter which you touch, you won’t be confused about what’s going to happen. The dial controls headphone volume, the switch toggles between wired and wireless modes, and the button mutes the detachable microphone—it’s actually part of the mic itself, so unplugging it gets rid of the button too.

Advanced Microphone: The microphone is rather unique among gaming headsets. Corsair calls it a “broadcast-grade” microphone, and it connects to the headset using mini-USB, rather than the typical 3.5mm jack. This means the mic, and its button, is actually capable of more complex things when paired with Corsair’s iCue companion app.

In the pantheon of gaming headset software, iCue sits somewhere in the middle of the pack. It’s definitely not the best in terms of layout or options, nor is it so bad that the experience of using the headset is worse for its involvement. Installing the app brings access to a suite of additional features, including virtual 7.1 surround sound, additional EQ presets, and the ability to customize the colored LEDs on the sides of the headset. Additionally, installing the app changes the microphone’s behavior a little bit, providing features such as noise suppression and voice-level normalization.

The Corsair Virtuoso Wireless SE is a high-end gaming headset that offers premium features, but it does not excel in all areas. As such, it may be worth considering other options if specific features such as wireless audio, customizable lights, or highly accurate microphone are a priority. The decision of whether to invest in this headset, which is priced at $70-$100 more than other options, ultimately depends on the individual’s specific needs and preferences in a gaming headset.