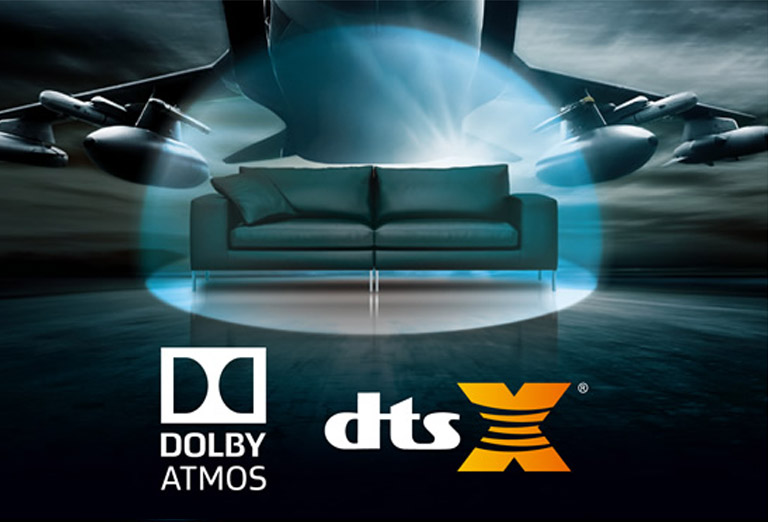 So 360 degree virtual reality movies aren’t quite mainstream yet. I mean, who will to strap on a headset? Every time there’s another disappointing Justice League movie, but at least 360 degrees surround sound has long been a mainstay of not just movie theatres, but home theatres as well. Or a typical set up will be a sub-woofer, two, for bass and five or seven speakers surrounding the viewer to help the sound. Well, surround the viewer.

Now, traditionally, the way this is worth is that depending on the surround audio encoding scheme used by the publisher, a device called a receiver would decode and playback discrete audio tracks for each speaker. That would correspond to the action on the screen, assuming a high quality mix. So the idea is that if you’re looking at the scene featuring a conversation, the voices will probably be coming mostly out of the center channel while the satellite speakers behind you focus on, let’s say, ambient background noise.

This one track for one speaker paradigm has been powering surround sound systems for a long time and it’s worked pretty well. But we’ve increasingly seen a different method surround sound delivery both in theatres and on Blu ray. This actually based around encoding is objects and sound channels. The principle behind Dolby Atmos and d.t s x but hold on a minute.

Sounds as objects. OK, so it means that instead of each audio track corresponding to only one speaker, the tracks are encoded with data that indicate some location in space instead of a specific channel. So let’s say you’re watching a scene where a plane is flying overhead toward you instead of, for example, the tracks match to the front speakers getting quieter and the tracks for the back speakers getting louder. As the plane passes by, the plane’s engines will instead being coded as a spot and space above you that moves around in real time.

Now, this may not sound like too much of a difference, but the idea here is that at most and setups scale very well traditional stereo setups had no way of knowing much more than distance from your couch about the physical placement of the speakers in your room. So results could be very inconsistent from a set up to setup. But because DTS X allow sales to be coated with location data like above the listener halfway between the screen of the chair and it gets the right hand wall rather than just right front speaker.

A decoder compatible with these formats will then take this positional data and the specific speaker configuration into account to produce sound that’s more accurately reflective of were supposed to be in space. Whether it has five speakers propped up on two by fours around your computer to represent this data, or 50 professional  loud speakers in a LA cinema and even include support for sounds above you.

Sense of space and realism

Some of these traditional surround doesn’t offer at most supports up to one hundred and eighteen objects and DTS X supports an unlimited number of objects. And both technologies can work with your conventional 5.1 and 7.1 speaker setups with at most boasting support for up to thirty four speakers for home theater. Now that might sound excessive and it probably is, but more speakers will enhance a sense of space and realism you’ll get.

Now, as for those of you who are taught to install speakers everywhere, you can find an empty spot on your wall or ceiling. There are a number of upward firing speakers that reflect off of your ceiling to simulate a real speaker above you, and you can even upgrade your existing power speakers just by plopping one designed to fire upward.

On top of them, we check out the sound bar that uses this technique recently. Overall, Linus tactics and the effect was fairly convincing. Of course, like with a new standard, not everything is at moves or d.t s capable. You’ll need a compatible receiver, though. Fortunately, the technology is becoming more and more common on blu rays, streaming services and even game consoles.